Truck campers are made to be carried on a pickup truck, but quite some time ago I realized that a pickup is actually not the optimal vehicle for doing so. I believe that if you're serious about carrying a truck camper, the only way to carry it is on a vehicle purpose-built for the job. We're serious – we live and travel in our camper full-time – so, with a little help, we designed and built the best truck-camper-hauler we could come up with.

First, we needed a truck big enough to do the job. While many smaller campers may be OK on a ¾ or 1-ton pickup, an 11.5-foot monster like ours requires more serious hardware. We found it in the form of a Ford F-550. Let's look at the specs:

In many ways, it superficially resembles the F-350 it replaced; the cab is virtually identical, for example. But underneath it's a whole different animal, and the driving experience is just no comparison.

A bit of that is due to Ford's new PowerStroke diesel engine, the next generation from what our old truck had; although smaller and quieter, it has more power, and generally feels significantly more refined. But most of the difference is simply due to driving a truck that is carrying the load it was designed to. We even notice the difference when we're not driving; this truck is so much more stable on its suspension that, unless we want to tweak our leveling, we frequently don't bother to put the camper's legs down when we park.

One big user-interface change is that we opted for the TorqShift automatic transmission on this truck (our old one had a 6-speed manual). It was the right choice; this tranny is very smooth and intuitive, probably the best I've ever driven, but what I'm most impressed with is what Ford calls its Tow/Haul mode. Pressing the button tells the transmission that it's moving some serious weight around, and not only does it delay upshifts to help get things going, it uses its link to the engine's computer to give more compression braking than our manual transmission could ever muster. At least for a load the size of ours, it completely obviates the need for an exhaust brake.

In fact, the only real downside we've found is the truck's mileage, down about 25% from what our F-350 delivered. Yes, this truck weighs more, but I'm convinced most of the blame rests with the 4.88:1 final-drive ratio (suspiciously 24% lower than our old truck's 3.73). And that was the tallest gearing we could get; the only way to go higher would have been to move down to an F-450. So should we have? Did we really need this much truck?

Yes, in fact, we did. Our rolling weight is now 15,600 pounds (7090 kg), and an F-450 only has a 15k GVWR. Could we have shaved off the difference? Probably, but the only way I can immediately think of would be to replace our 1200-pound (545 kg) utility body with a 500-pound (227 kg) pickup bed. And the big drawback to a pickup, in our experience, is wasted space. The camper is eight feet wide, but its floor only occupies the middle four feet. Those extra two feet on each side of the floor are mostly wasted; some of that space is taken up by the truck's rear wheels, and little doors inside the camper give access to a bit of extra storage inside the bed of the pickup truck, but that's it. The rest of it is unusable. And believe me, when fulltiming in a truck camper, storage space is priceless.

So, what if we had a truck with two-foot-deep storage boxes on each side of a flat, four-foot-wide floor? Perfect – no wasted space. This is exactly what we had built, a custom version of what the truck body industry calls a utility or service truck. Not surprisingly, I'm not the first to think of putting a camper on one. What does surprise me a bit is how few people do it; in twenty-one months of roaming the USA and looking at truck campers, we've only seen two or three such arrangements.

Why bother? By my calculations, it provides us with nearly 68 cubic feet (1.92 m3) of storage that we just didn't have with the pickup. 68 cubic feet! That's almost as much as our whole bathroom (78 cubic feet / 2.2 m3). It's a lot. And perhaps more important than the sheer volume is that we now have the room to organize what we carry, so that (usually) we can find what we're looking for more easily. We keep our shore power extension near the camper's power cord, our water hoses directly below our fresh water fill, that kind of thing. 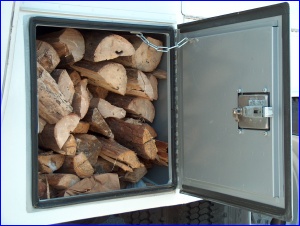 Additionally, the utility body has a few specific storage tricks up its proverbial sleeve:

Is there anything we don't like about the utility body? Generally, the clearances are a bit too close all around; when laying it out, Douglass didn't allow for enough real-world imprecision. So the body taillights rub against the back of the camper, our front jacks get scraped up by the diamond plate when swung in, that kind of thing. And they didn't cut the wheelwells the right size, so if we move up to beefier tires (as I'd like to), we'll have a problem. Nothing major, but it's annoying.

More important is that the tiedown system definitely needs work. The front ones are fine, they use two of our old Happijacs between loops firmly welded onto the body and eyebolts we put on the front jack brackets. No, it's the rear system that we need to improve; it consists of two more welded-on loops that, when lined up with our camper's existing rear tiedown points, allow a bolt to be put through to secure everything. The problem's in the "when lined up" part; the alignment of these has to be nigh-perfect for the bolt to go, and that level of perfection is nigh-impossible.

I suspect that more practice will help – we recently discovered that we can use the camper's jacks independently to fine-tune its position over the truck – but so far, the fear of trying to do this alignment has kept the two parts of our RV attached more often than we might like.

And that's really how I think of this truck; it's the bottom half of a single RV that we've assembled from its component pieces. Visually, I think the rig looks much more unified than it did on the pickup, a bit like a Class C motorhome that just happens to come apart. I like it a lot. Chalk it up to my childhood love of Legos.


We've put over 15000 miles on this truck already, and I want to just make a few comments relevant to our experience so far.

We're still really happy with our choice of camper haulers, and we get quite a bit of e-mail asking about it. One recurring question is the reliability of the new 6.0 liter PowerStroke diesel; there were a lot of well-publicized problems with this engine, especially in the first few months after its 2003 introduction. We missed most of these with our September 2004 build date, but we've still had a few issues, and with one thing and another we've had five unscheduled service visits in our first year of ownership, not exactly a stellar record. Here's what has happened:

We're hoping that we're past the worst of it, and that the truck has settled into decent reliability. I do find it a bit irritating that Ford doesn't pursue known problems more, at least to the point of publishing service bulletins for their dealerships so they're not entirely reliant on the engine diagnostics. Without our own use of online resources, especially the forums at TheDieselStop.com, I don't know if we'd have resolved some of these issues.

For the 2005 model year, Ford has introduced a new coil-spring front suspension on the SuperDuty trucks, replacing the leaf springs that we've had on both of ours. One consequence of this that I envy is a significantly tighter turning circle, down from our expansive 58' to a more-reasonable 44'. But this new front end is also stronger, contributing to higher GVWRs for the entire lineup, and I believe that this has changed the camper-carrying landscape significantly. First, the dual-rear-wheel F-350 is now rated for 13,000 pounds, enough for virtually any stock camper, even including optional equipment and cargo. And than there's the new F-450, with a GVWR of 16,000, enough for our big utility-body-equpped, fulltimer-loaded setup. Admittedly, such a truck would have less margin than our F-550, but I suspect the taller final-drive-ratio would be worth the tradeoff, and if we were doing it over again, I think that's the route I'd go.

Where UR now: Home » Notes » Plenty of Truck